Total U.S. sales of plug-in electric vehicles have increased in recent years, but still represent only about 0.7 percent of new vehicle sales in 2014 so far

In 2013, there were about 70,000 battery electric vehicles (EVs) and 104,000 plug-in hybrid electric vehicles (PHEVs)—small numbers compared to around 226 million registered vehicles in the United States, according to the Energy Information Administration.

Total U.S. sales of plug-in electric vehicles (PEVs) have increased in recent years, but still represent only about 0.7 percent of new vehicle sales in 2014 so far, up from 0.6 percent in 2013 and 0.4 percent in 2012. California is home to almost half of all of the nation's PEVs, but even in California, only about 5 out of every 1,000 registered vehicles are PEVs. 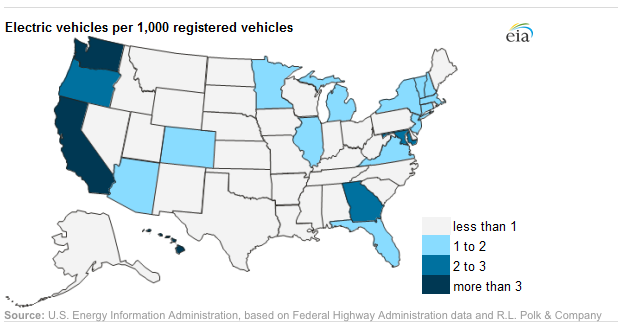 Several states offer tax incentives to reduce the upfront cost of PEVs to consumers. These incentives are in addition to a federal (nationwide) tax credit, which ranges from $2,500 to $7,500 depending on battery capacity and gross vehicle weight. Examples of incentives include the following:

· Washington has exempted EVs from the state's 6.5 percent sales and use tax. However, the incentive does not apply to the purchase of PHEVs. While PHEV ownership is higher than that of EVs for the United States, the reverse is true in Washington.

· Georgia offers a zero emissions vehicle (ZEV) tax credit of 20 percent of the cost, up to $5,000. ZEVs include vehicles powered by electricity or hydrogen fuel cells.

· The District of Columbia has a tax credit of 50 percent of the incremental cost of an EV, up to $19,000. The District also exempts EVs from its excise tax, which varies from 6 percent to 8 percent depending on vehicle weight.

Some utility companies offer special electricity rate structures for PEV owners to incentivize vehicle charging during off-peak hours, generally in the evening. For instance, DTE Energy in Michigan offers customers discounted electricity rates at off-peak hours if they install a 240-volt Level 2 charger, which powers a PEV more quickly than a 120-volt Level 1 charger. The ratepayer must also install a separate meter dedicated to the PEV. Customers also have the option of paying a flat $40 monthly fee for charging.

California implemented a ZEV mandate that requires automobile companies to produce for sale a certain percentage of zero emission vehicles, such as electric and hydrogen fuel cell. By 2025, about 15 percent of all new light-duty vehicles sold in the state must be either electric or fuel-cell powered.