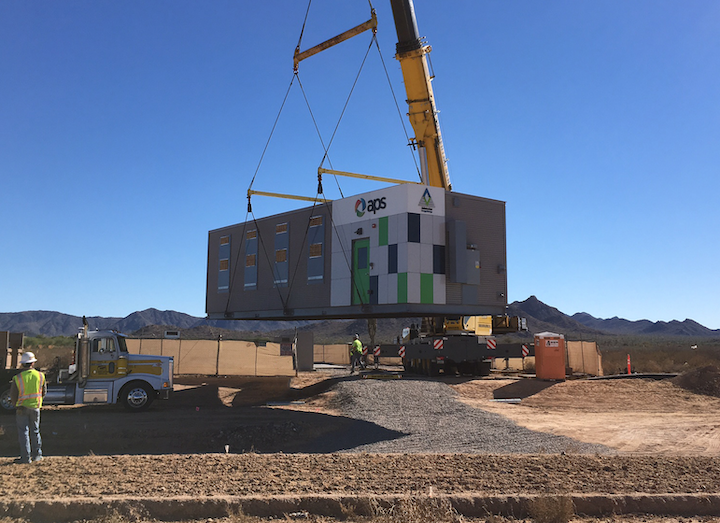 This project will make Arizona home to one of the largest battery storage systems in the country. The design models how the future of solar and storage can work together to deliver power to customers during peak hours.

First Solar will build and operate this flagship facility that includes a 65-MW solar field to charge the battery. APS has signed a 15-year power-purchase agreement with First Solar that will enable APS to use the stored battery power when energy use is at its peak later in the day.

By pairing clean solar energy with advanced battery technology, First Solar and APS will be able to store power when the sun is high in the sky and deliver it to customers between 3 and 8 p.m. when the sun is on its way down, but energy use is peaking. This means that APS customers can get more of their peak power from solar.

This project adds to the more than one million solar panels and three grid-scale batteries currently on APS’s system. Over the next 15 years, APS plans to adopt more than 500 MW of additional battery storage.

For First Solar, the project represents the next step in solar energy. Utility-scale solar is a clean energy resource, and the addition of battery storage allows the power of the sun to be used in the evening when the energy is needed most. This is a logical use of technology in a state that sees nearly 300 days of sunshine per year.

The project was developed in response to APS’s request for peaking capacity resources to serve customers between the peak hours of 3 and 8 p.m. during the hot summer months. APS has full use of the 50 MW battery and is able to maximize hourly capacity until it is fully discharged. The facility is set to begin service to customers in 2021 and will be built directly adjacent to the existing APS Redhawk Power Plant in western Maricopa County.